Plantronics is a communications company that has been around since the 60s, where they revolutionized mobile headsets for use by airline companies. This brought us all one step closer to the compact headsets that are available today, and Plantronics have only continued innovating their headset designs till the present day. If you’re having trouble finding other Plantronics products, it’s worth mentioning that they rebranded to Poly in 2019 after they were acquired by Polycom.

This history is what led to products like the M180 and the M165, in-ear earphones that are so much more convenient than headphones that sit on or around your head. If you’re here, you already know about these earphones and want to know which one is worth your time and money. 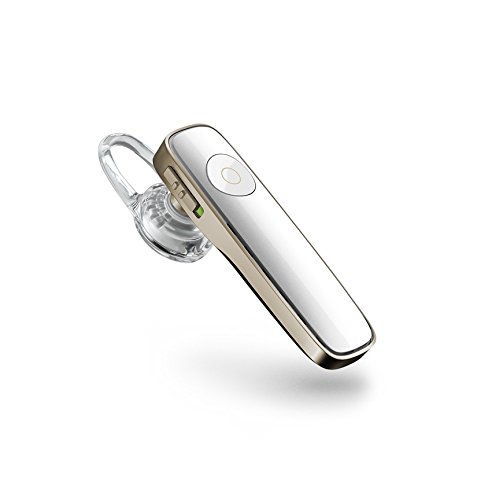 Since they’re part of the same product line, reviewing the M180 and M165 is pretty easy. I’ve done just that below, where you can find two small reviews of these earphones’ important features. You should be able to use these to understand the similarities and differences between these products, allowing you to choose whichever one you prefer.

The M180 is just one example of the wireless Bluetooth headsets that Plantronics offers, and it’s one of the more advanced earpieces in their product catalog. The big draw of the M180 in particular is its superior sound-canceling abilities, but I’ll go into more detail about that later.

For now, though, I should explain how I’ve structured these reviews. I’ve divided the review into subheadings that correspond to features or aspects of the product. For example, sound quality is predictably the most important thing you want out of some earphones, but I’ve also covered fit and cost too.

I’ve already said how sound quality is the most important feature of an earpiece when you’re buying, so this shouldn’t come as a surprise. What is an earpiece worth if the sound that comes out of it is garbage?

Slick and subtle earpieces like the Plantronics M180s are used for taking calls just as much as listening to music, so audio speech clarity becomes so much more important when reviewing products like these.

The Plantronics M180 achieves great speech clarity by reducing low frequencies. This means the overall sound profile can be described as being in the low mids to high range, so you’re getting fully audible sound no matter what’s coming through the earpiece. This means speech is enhanced when it’s coming into your ear while the earpiece is still capable of the high frequencies that music tends to reach.

The music quality should also be enough to impress, too, though it must be said that there’ll be about five seconds of distortion if a call comes in while you’re listening to music. It’s not that much of an inconvenience since a call will take priority over music listening, and once the noise cancellation kicks in the earpiece works fine.

In terms of its incoming audio, the M180 is audibly similar to the M165, so I think it’ll be other features that help you to determine which model you want. This is a two-way earpiece, however, so the mic quality is also important. This is where Plantronics flex their muscles, using proprietary dual-microphone active noise-canceling tech to relay your voice in a clear and consistent way.

To the normal eye, the M180 is a standard Bluetooth headset that has a protruding shape that’s noticeable without being distracting or obnoxious to wear. It’s also thoroughly made from plastic, which is what you should expect from an earpiece that needs to be light and comfortable when in your ear. The plastic is also fingerprint-resistant, so the M180 will look good for a longer time.

While the plastic casing is light and should stay clean for longer, it also has a few adjustability options so that you can get the perfect fit. The tip of the earpiece is rotatable, allowing you to line it up with your ear canal to fit ears at all positions on someone’s head. If the on-ear fit is more of a problem, the M180 also comes with an accompanying earl loop that clips onto the earpiece. You adjust this loop until the earpiece fits onto your ear, tight enough to stay on but not too tight as to be uncomfortable.

The big appeal of wireless Bluetooth earpieces is that you can take them wherever you want but keeping earpieces well-powered for a long time is something that even the biggest manufacturers still struggle with. You can’t strap a lithium-ion brick to a tiny earpiece, so how do you get more power from your earpiece without getting a larger battery?

Power-saving features are the answer. By decreasing power usage wherever possible, a battery of any size should last for longer than industry counterparts who waste energy when idle. Plantronics’ M180 earpiece does this through the DeepSleep feature, a hibernation system that puts the earpiece to sleep, and waking the earpieces up is as simple as tapping them. True to its name, the earpiece can sleep for as long as six months. That’s longer than most animals that actually hibernate!

So, how much does this feature help the battery life? The M180 gets approximately seven to eight hours of talking time. That’s talking time, so when the earpiece is active and you’re sending or receiving a call through it, so it’ll last longer if you’re not using it often. This is pretty impressive, and seven hours of call time should see you through entire weeks if you’re not making calls with it on a daily basis.

As for what else the M180s are capable of, they also have great connectivity options for those of you that use a lot of smart devices. You can connect your earpiece to voice assistants like Siri or Cortana, allowing you to command them through the earpiece. You can also connect to other devices, like smartphones, so that when a call comes through it’ll automatically get redirected to your earpiece. You can also connect it to a games console for gaming.

Otherwise, Plantronics has the Plantronics Hub app that you can get on both Android and iOS. This app has a feature called Find My Headset where GPS tracking will lead you to your earpieces. This is handy for those who lose their earpieces, sure, but outdoorsmen who travel far and wide will get the most use out of these since it enables you to find them across further distances.

The cost for the Plantronics M180 varies depending on where you find them, but you can generally expect the M180 to be approximately twice as much as the M165 model.

The Plantronics M165 earpiece is quite similar to the M180 model, though there are a few differences. I’ve explored them in this short review, along with the other properties that you may want to consider as a potential buyer.

As I’ve mentioned, the M165 has most if not all of the great sound quality features of the M180 earpiece, so you don’t need to worry about the M165’s audio ability too much. It features the same mid to high-frequency sound profile that’s ideal for both chatter and music, and the speaking microphone has dual-mic noise cancellation so that noise pollution doesn’t interfere with calls.

The M165 earpiece looks quite similar to the M180 in terms of shape and size, though it’s about a third lighter than the M180 at seven grams. Aesthetically, the biggest difference between the two earpieces is that the M165 has a rounded button on its back that isn’t present on the M180.

It comes with the standard clips so that you can find your perfect fit, those clips coming in three sizes that you can choose from. This lacks the direct adaptability of the M180s, but there are small, medium, and large ear clips and ear tips that you can use to find the best fit for you. Between these three sizes, you should definitely find one that’s comfortable for you and your ear.

You’ll be glad to know that the M165 has that DeepSleep system that I’ve already talked about. This means the earpiece will take a nap whenever it’s not being used, saving you precious power and prolonging the battery life of this earpiece.

The M165 and the M180 are very similar when it comes to battery life, the M165 also lasting for approximately six to seven hours of talking time. If you’re not talking often, you can expect them to last even longer.

The earpiece is easily recharged through a Micro USB, which all of us have lying around nowadays so it shouldn’t be too much of a problem.

The M165 boasts the same voice-command features that the M180s have, allowing you to sync them with domestic voice assistants like Google Now or Siri. Using words like “answer” or “ignore,” you can start or push off a phone call with your voice when both hands are occupied. You can also connect them to a smartphone or a games console so that calls or in-game communications are rerouted right into your ear canal.

The M165s run off of Bluetooth 3.0, which can use multipoint tech to connect to other devices but is behind the Bluetooth 4.2 or 5 that new devices come with. You can also use a backtrack function with a headset-finding app to find the earpiece should you lose it.

Though the price will change depending on where and when you buy them, as of the writing of this page the M165s consistently priced at half the price of the M180s.

Scarlett Solo Vs 2i2