Having a brand in mind is useful when searching for your newest gadget.

It drastically narrows down your options and allows you to focus on the products within your chosen brand, making it easier for you to come to a decision.

If you’re here, you’re interested in some of the products that JBL has to offer, namely the Flip 4 and Flip 5. JBL is one of the oldest Stateside audio companies, having been established in 1946, so you can be sure that you’re getting quality products that have been used by hundreds of thousands of other buyers over the years.

To help you decide which one you want to get, I’ve reviewed both the Flip 4 and Flip 5 below.

Where I could, I’ve directly compared the two, but otherwise, I’ve separated my review into segments so you can easily read what each speaker offers and choose which one you like the most.

Since I'm comparing the JBL Flip 4 to the Flip 5, a later model in the same product line, it’s not about which one is technically the best but instead which one is worth you spending the money on.

If the Flip 4 will do just fine, you don’t want to spend extra on the Flip 5. Likewise, the Flip 5 might be the best option once you compare them.

What use is a speaker if the sound quality is poor? The Flip 4 has two audio drivers whereas the Flip 5 only has one.

This means that the JBL Flip 4 has a more complicated audio setup than the Flip 5, but that doesn’t make it a more powerful one.

The real question you should be asking yourself is whether you want a mono or a stereo speaker model.

As the stereo speaker here, the Flip 4’s two drivers working in tandem create a clearly defined sound separation between the left and right sides of the device.

If that’s important for you, go for the Flip 4 over the Flip 5.

In terms of the overall sound quality, the Flip 4 delivers an agile sound profile that covers the mids and highs that you’d expect any dynamic speaker to cover.

Where the Flip 4 sags is the bass, where it lacks the punch and power of its next evolution, the JBL Flip 5.

To look at the Flip 4 and Flip 5, they look nearly identical from the outside. That doesn’t mean they’re identical, however, and you may be surprised at how many features the Flip 4 has over the Flip 5.

The Flip series is named for the fact that they can lie both horizontally and vertically depending on what is most convenient, and both the Flip 4 and the Flip 5 benefit from this ergonomic versatility.

The control panel on both don’t take up much room, and the buttons are covered in a rubberized material that keeps them clean and undamaged.

On the Flip 4, the buttons cover a play and pause function, volume adjustment buttons, and then the pairing option, which is a Connect+ button.

The pairing button is the main difference between the two Flip speakers, but I’ll go over that more when I cover connectivity.

So, what does the Flip 4 have over the Flip 5? The Flip 4 has more details built into it, namely the speakerphone function that a lot of portable Bluetooth speakers have.

The tradeoff here is that the Flip 4 has the mini USB-B jack, which is becoming increasingly obsolete now that the ubiquitous USB-C has taken the tech world by storm.

Speaking of storms, that USB-B port also has a protective flap to keep it safe from liquids.

The JBL Flip 5 doesn’t have this, but that’s because the port itself is waterproof, and the 4’s flap is just another part of the device that can potentially break.

The JBL Flip 4 is rated at IPX7 waterproof rating. This means that the Flip 4 can theoretically be submerged for approximately thirty minutes in one-meter deep water without breaking.

I wouldn’t recommend testing this since you don’t want to tempt fate, but it does guarantee that any water the speaker is likely to come into contact with won’t be enough to cause you any problems.

If you do plan on taking the speaker fishing or onto a boat, you should be aware that it isn’t buoyant, so it will sink if it’s dropped into a body of water.

Other outdoor uses are still feasible thanks to the fact that it’s also dustproof, so dirt or sand won’t interfere with its sound quality.

As I’ve already mentioned, the Flip line comes in a sleek design that can be laid either horizontally or vertically, and each unit is small enough to carry.

The real debate comes when comparing the batteries of the Flip 4 and Flip 5. They’ll both last about twelve hours at rest or half to two-thirds of that if you use them a lot.

That said, the JBL Flip 5 will recharge approximately one hour faster than the Flip 4.

Despite the measurable upgrades that have been made in the electronics of the Flip 5 over the Flip 4, their battery lifespans are almost identical.

Why is this? It’s simple when you bring out the specs of each speaker.

The Flip 4 exerts 16W during operation whereas its beefier cousin burns away 20W, essentially leveling each speaker’s power demands.

I already mentioned Connect+ and its presence on the JBL Flip 4, so it’s time I explain what that is. Connect+ allows the user to connect to other speakers that are also Connect+ compatible.

There is a problem, unfortunately, which is that JBL moved away from Connect+ and to PartyBoost with the JBL Flip 5.

They’ve been quite aggressive with this transformation, too, since the newer models can only run PartyBoost and have left Connect+ by the wayside.

Firmware updates are available to modernize a Flip 4 running Connect+ software, but there’s no new support for these speakers coming from JBL.

Last but certainly not least, how much will the JBL Flip 4 set you back? You can read up on all the audio specs in the world but if you can’t afford one speaker, you’re going to go for the budget-friendly option.

Now, the Flip 4 is a premium product from a well-known brand, so I wouldn’t use the word affordable to describe its pricing, but it’s cheaper than the JBL Flip 5 at any rate. 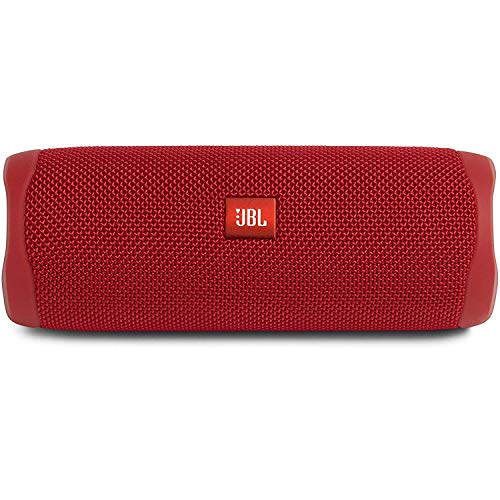 Now let’s take a look at the JBL Flip 5.

This is commonly thought of as the Flip 4 with a facelift, and you’ll see why below where I’ve gathered all the relevant information you need to decide if the Flip 5 is an improvement on the Flip 4.

The JBL Flip 5 is a mono speaker, using a single 44mm audio driver to pump sound outwards in a consistent direction. There’s no sound separation here, so the stereo Flip 4 is better for those who want that.

The Flip 5 also has a better frequency response than the previous model and it makes great use of an extra four watts of power, all of which translate into a speaker that’s more powerful.

The most powerful sound a speaker can create is the bass, so it isn’t surprising that the Flip 5 beats the Flip 4 here.

The Flip 5 is aesthetically identical to the Flip 4, so there’s not much to say about the casing here that I haven’t already said above.

It’s a tubular sound system with a control panel that has rubberized buttons, what else were you expecting?

The main difference in buttons is that the Flip 5 doesn’t support Connect+, its pairing button is a PartyBoost link instead.

What’s more important to talk about are the design features of the Flip 5 or lack thereof. The Flip 5 doesn’t have an analog aux input or a mic for speakerphone abilities.

It also doesn’t have voice assistant integration. There’s no doubt that the Flip 4 is the better option for those who want a lot of secondary uses for their device.

The Flip 5 is the more future proofed device thanks to its USB-C, which many gadgets are transitioning to nowadays.

The ports that this USB-C connects to are also waterproof, so there are no distracting flaps dangling off of the speaker as is the case with the JBL Flip 4.

The two speakers are also the same in that both are rated to an IPX7 dustproof and waterproof rating.

There is a big difference here though, which is that the Flip 5 floats despite being heavier than the 4. If you drop this speaker into a body of water, it won’t sink to the bottom.

What you need to understand with the JBL Flip 5 is that the chain tech they used for previous models has changed. Having used Connect+ in the past, they now use PartyBoost. What does this mean?

It means the Flip 5 won’t be compatible with older JBL products and will only communicate with other PartyBoost-compatible devices.

This means your choice can come down to what you have more in your house, Connect+ tech, or PartyBoost tech.

The number 5 is larger than 4, so you’ve probably already figured out that the Flip 5 will put a larger hole in your wallet than its predecessor.

Assuming all else is equal in your eyes, your choice might just come down to whichever you can afford, and that means the Flip 5 is the pricier option for you to buy.

Sennheiser Game One Vs Game Zero